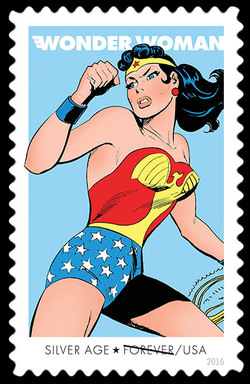 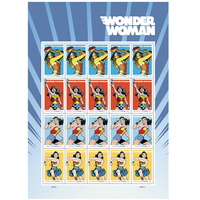 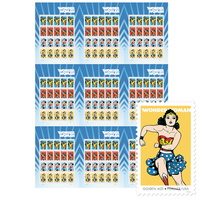 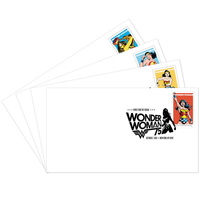 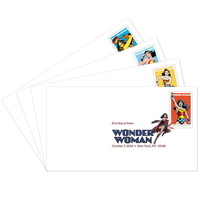 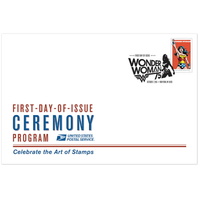 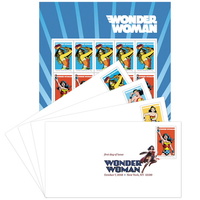 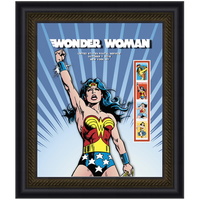 On October 7, 2016, in New York, NY, the U.S. Postal Service® will issue the Wonder Woman stamps (Forever® priced at 47 cents), in four designs, in a pressure-sensitive adhesive (PSA) pane of 20 stamps. The stamps will go on sale nationwide October 7, 2016.

Seventy-five years ago, while most comic book damsels in distress helplessly awaited rescue by their male protectors, Wonder Womanconfidently brushed aside this established gender barrier. In groundbreaking tales, Wonder Woman continues to defuse the havoc of a male-dominated world—always with justice, equality, and peace. The U.S. Postal Service® celebrates her diamond anniversary by chronicling her evolution in comics, from her World War II origins to today.

In the wake of Superman’s phenomenal launch in 1938, hordes of copycat Super Heroes appeared in the pages of comic books. Most were short-lived, some endured, and virtually all were male characters. Then, in 1941, came Wonder Woman. With her peaceful ways and fearlessness, Wonder Woman stood out from the pack.

Creator William Moulton Marston was a psychologist who contributed toward the development of the polygraph—“lie detector”—and whose theories about women’s potential were atypical of his era. The middle-aged Ivy Leaguer was unlike most creators of Super Heroes in the genre’s early days: typically scrappy young sons of immigrants, seeking opportunity during the Depression. In comic books Marston recognized a powerful medium for his message. For this mission he assumed a secret identity: Charles Moulton.

Marston’s Wonder Woman was unique in its throwback visual style and its fast-forward intentions for society. He expressed a view that women’s power lies in their superior capacity to love and believed that women should rule the world—and would do a better job of it than men.

Although Wonder Woman was preceded by a handful of female characters who could be deemed Super Heroes, she quickly eclipsed them all. Her debut in issue #8 of All Star Comics hit newsstands on October 21, 1941, preceding America’s entrance into World War II by just seven weeks. She next headlined in Sensation Comics and within a few months her popularity led to a stand-alone Wonder Woman comic book. The publisher of these titles, All-American Publications, would later merge with Detective Comics and others to form DC Comics.

In Wonder Woman’s origin story, Diana, a princess, rescued an American military pilot and intelligence officer from his wrecked plane near her home on an uncharted island, a utopia of immortal women based on the mythological Amazons. Diana’s mother, the queen, decreed that an ambassador must deliver the injured pilot, Steve Trevor, back to America both to rid the island of male presence and to serve the causes of peace and equality as war enveloped the world.

Disguised, Diana entered a competition devised to determine the best candidate and emerged victorious unbeknownst to her mother. Reluctantly, the queen allowed Diana to go, bestowing upon her a star-spangled costume, an invisible airplane, and a magic golden lasso that could compel those ensnared to tell the truth and submit to the loving will of Diana’s new alter ego: Wonder Woman. In the guise of Diana Prince, she assisted and adored Steve Trevor. As Wonder Woman, she rescued him from one perilous situation after another while doing her part to save the world.

At last victorious in World War II, Americans were eager to return to domestic matters. Women left their wartime jobs to accommodate returning soldiers in the workforce, settling into family life and the baby boom. Super Heroes, deprived of Axis foes, lost their relevance and disappeared in droves. Although Wonder Woman remained popular enough to survive the downsized world of Super Heroes, Marston, the driving creative force behind her, was stricken with polio, then cancer, and died in 1947.

At the same time, the comic book industry was coming under powerful pressure to remove realistic criminality and took upon reforming itself of anything perceived as subversive. In the hands of writers and editors who didn’t share Marston’s societal agenda for Wonder Woman, and in an era of strict gender roles, the amazing Amazon was soon being defined much more by romance than by bold action. Her red high-heeled boots were suddenly replaced with what appeared to be ballet slippers.

By the late 1960s, society was undergoing revolutionary changes. Wonder Woman needed an infusion of relevance. In one attempt, she sacrificed her superpowers, trained in the martial arts, opened a mod boutique, and donned hip clothing instead of the star-spangled costume. Her look may have been reflective of the popular culture at the time but the retooling was several beats behind the burgeoning women’s liberation movement. Feminists protested that a weakened Wonder Woman left girls deprived of a female peer among the Super Heroes.

A 1972 collection of World War II–era Wonder Woman comics resonated with readers. DC Comics reintroduced a red-booted Wonder Woman and Diana reclaimed her powers. In the following years she appeared in a long-running animated series with an ensemble of Super Heroes, then in a live-action primetime hit show.

Wonder Woman’s Modern Age writers and artists tied the character more closely to her roots in Greek mythology in the late 1980s. Stories in the first decade of the 2000s focused on Wonder Woman's role as the Amazons’ ambassador to the United Nations. Intriguing storytelling depth and stunning stylization distinguished the “New 52” series in 2011, introducing a deep secret: Diana is the daughter of Zeus.

Wonder Woman found her widest Modern Age audience in the Justice League animated series. This interpretation of Wonder Woman as an outsider, a recent arrival from her home island and new to the modern world and the Super Hero role, offers a novel angle to a beloved character. Writing, animation, and voice characterization that capture Wonder Woman’s courage and compassion have been key to the series’ popularity.

The Wonder Woman stamps are being issued as Forever® stamps. These Forever stamps will always be equal in value to the current First-Class Mail® one-ounce price.