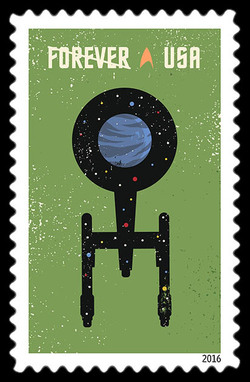 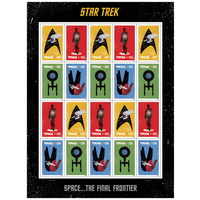 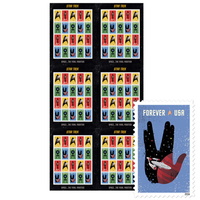 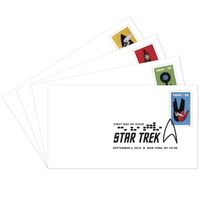 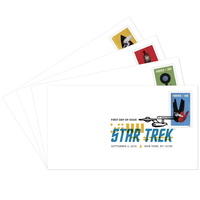 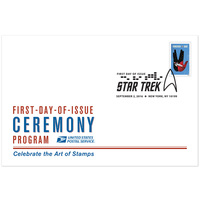 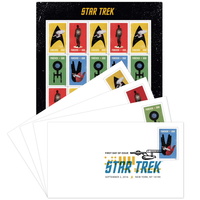 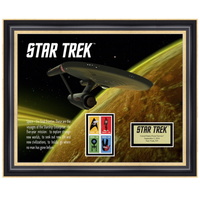 On September 2, 2016, in New York, NY, the U.S. Postal Service® will issue the Star Trek stamps (Forever® priced at 47 cents) in four designs, in a pressure-sensitive adhesive (PSA) pane of 20 stamps. The stamps will go on sale nationwide September 2, 2016.

On September 8, 1966, Star Trek premiered. Centered on the interstellar voyages of the U.S.S. Enterprise, the prime-time television program's mission was to boldly go where no man has gone before.With an intricate futuristic setting, multicultural cast, and story lines that touched on social issues, Star Trek pushed past the boundaries of popular science fiction and became a worldwide phenomenon.

Each of the 20 self-adhesive Star Trek stamps showcases one of four digital illustrations inspired by elements of the classic TV show: the Starship Enterprise inside the outline of a Starfleet insignia against a gold background, the silhouette of a crewman in a transporter against a red background, the silhouette of the Enterprise from above against a green background, and the Enterprise inside the outline of the Vulcan salute (Spock's iconic hand gesture) against a blue background. The stamp sheet includes five of each design. The words FOREVER USA, separated by a small Starfleet insignia, appear along the top edge or the bottom edge of each stamp. The words SPACE... THE FINAL FRONTIER, from Captain Kirk's famous voice-over, appear beneath the stamps against a background of stars.

During its run on NBC, Star Trek deftly combined action, adventure, drama, fantasy, and allegory. Episodes alluded to the Cold War, the Vietnam War, the population explosion, the growing generation gap, and race relations. NBC canceled Star Trek after three seasons, but the show soon entered syndication and grew even more popular. Soon, the once fledgling sci-fi program blossomed into a franchise that included an animated television series, multiple live-action series, and a string of motion pictures.

Antonio Alcalá was the project's art director. The issuance features artwork by The Heads of State, who also designed the stamps. The Star Trek stamps are being issued as Forever stamps. Forever stamps are always equal in value to the current First-Class Mail one-ounce price.