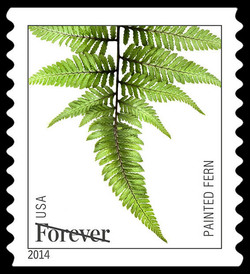 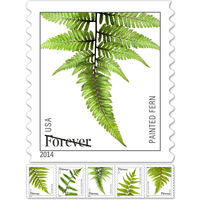 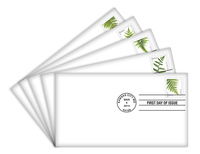 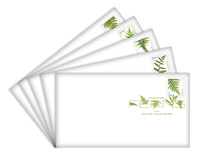 On March 6, 2014, in Kansas City, Missouri, the U.S. Postal Service® will issue the Ferns (Forever® priced at 49 cents) definitive stamp in five designs, in a pressure-sensitive adhesive (PSA) 10K coil of stamps. The stamp will go on sale nationwide March 6, 2014.

Ferns predate flowering plants in the earth's evolutionary history, dating back millions of years. The word “fern” is ancient as well, from the old Anglo-Saxon “fearn,” which means “feather.” Some ferns do indeed look feathery, but that is only part of the story. Types of ferns range from tiny moss - like plants to giants as tall as trees, and they flourish in diverse environments - from forests and deserts to alpine, aquatic, and tropical habitats.

With roots, stems, and leaves - called fronds - ferns are similar to flowering plants, yet they differ in significant ways. Ferns do not produce flowers or fruits, nor do they produce seeds. They reproduce from spores, which cluster together into sori, the small brownish patches most often found on the bottom sides of the fronds. Spread by the wind, only a few of the spores find the perfect spot to germinate.

In the spring, the new plant appears above the ground in a tightly curled formation. As the new fronds start to unfurl, they resemble the neck of a fiddle, called fiddlehead. Fiddleheads of certain species of ferns are considered a seasonal delicacy, and they appear on menus during the early spring. The new growth is also sometimes referred to as a crosier, as it echoes the shape of a bishop's crosier or staff.

Art director Phil Jordan created the stamp art by selecting five fern images from among dozens of existing photographs. He tightened the focus on the detail of each frond to fit the space within the stamp border. After rotating some of the fronds to provide visual interest, he oriented the five in relation to one another so that they made a unified whole.