Flags of Our Nation 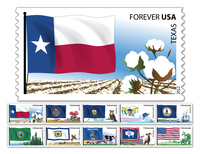 First-day of Sale Set of 10 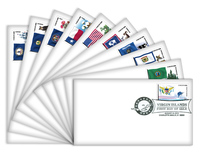 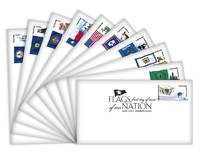 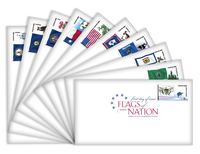 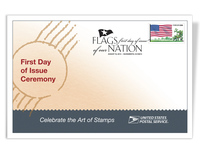 On August 16, 2012, in Sacramento, California, at the American Philatelic Society Stamp Show, the Postal Ser­vice™ will issue the Flags of Our Nation: Set 6 stamps (For­ever® priced at 45 cents) in 10 designs in a pressure-sensitive adhesive (PSA) coil of 50 stamps. The stamp will go on sale nationwide August 16, 2012.

Flags, whether national or regional, generate affection and pride and also make beautiful stamps. The sixth, and final, set of ten stamps in the Flags of Our Nation series includes the flags of eight states — Texas, Utah, Vermont, Virginia, Washington, West Virginia, Wisconsin, and Wyoming — the flag of the U.S. Virgin Islands, and the flag of the United States.

In addition to flag art, each stamp includes artwork that provides a “snapshot view” of the state or other area represented by that flag. In most cases, an everyday scene or activity is shown, but occasionally the view is of something less commonplace—rare wildlife, perhaps, or a stunning vista. “Snapshot” art for the Stars and Stripes stamp was inspired by the opening lines of “America the Beautiful,” written by Katharine Lee Bates (1859-1929).

The Texas flag dates back to the Republic of Texas. Snapshot art depicts a field of cotton, a major cash crop in the “Lone Star State.”

The dark blue Vermont flag depicts the state coat of arms with a pine tree at the center. Snapshot art depicts a great horned owl.

Centered on the white flag of the U.S. Virgin Islands is a simplified United States coat of arms. Snapshot art features a leaping sailfish.

The blue field of Virginia’s flag features its coat of arms. Three ships in the background evoke those that brought English settlers to Jamestown in 1607.

The Washington flag depicts the state seal at the center of its dark green field. Snapshot art evokes the state’s evergreen forests.

The white field of West Virginia’s flag includes the state coat of arms and a wreath of rhododendron. A flock of wild turkeys is shown in the background.

The Wisconsin flag features the state coat of arms and “1848,” the year the state joined the Union. Snapshot art depicts dairy cattle.

The state seal and a silhouette of a bison appear on Wyoming’s blue flag. Snapshot art features two bighorn sheep.

Snapshot art for the Stars and Stripes depicts “the fruited plain” from the lyrics of “America the Beautiful,” by Katharine Lee Bates.

The stamps in Set 6 of the Flags of Our Nation series are being issued as Forever® stamps. Forever stamps are always equal in value to the current First-Class Mail one-ounce rate.