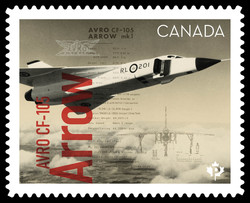 Possibly one of the best known planes that never saw mass production, the Avro CF-105 Arrow was a twin-engine, supersonic, interceptor aircraft. It was designed and produced by A.V. Roe (Avro) Canada and its two subsidiaries – Avro Aircraft and Orenda Engines – in what was then the town of Malton, today part of Mississauga, Ontario. Developed between 1953 and 1959 to bolster North American defence in the postwar era, the delta-winged Arrow is considered one of the greatest technological achievements in Canadian aviation history. The Arrow, capable of flying at more than twice the speed of sound, was the first aircraft to adopt a “fly by wire” automated flight control system, and it featured a weapons bay that could hold almost any size weapon. Its Iroquois PS-13 engine offered groundbreaking advancements in power, lightness of weight and fuel efficiency.

The first Arrow (RL-201) was completed in October 1957. The following March, test pilot Jan Żurakowski made a successful 35-minute flight from Malton Airport (now Toronto’s Lester B. Pearson International Airport). Five Arrows were produced before the program was cancelled on February 20, 1959.