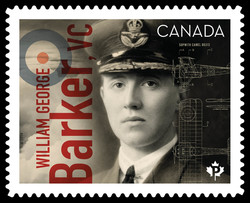 Born in a log cabin near Dauphin, Manitoba, William George Barker, VC, was a First World War pilot with the Royal Air Force who became (and remains) the most decorated member of the military in the history of Canada and the British Empire. For his wartime deeds and bravery, including 50 aerial victories in more than 900 hours of combat, Barker received the Distinguished Service Order (twice), the Military Cross (three times), the Croix de Guerre and the Medaglia d’Argento al Valor Militare (twice). He was awarded the Victoria Cross for downing four German planes during his final fight over France in October 1918, despite being vastly outnumbered and falling in and out of consciousness from his wounds.

Back in Canada after the war, Barker and fellow flying ace Billy Bishop formed Bishop-Barker Aeroplanes Limited, one of Canada’s first commercial air services. In a round-trip aerial race from Toronto to New York in 1919, Barker became the first Canadian pilot to carry international airmail. In 1921, he became the first to fly commercial cargo between the United States and Canada. Barker was appointed the first president of the Toronto Maple Leafs® by the hockey team’s founder (and fellow Flying Corps member) Conn Smythe. His last, solo dogfight became an instant legend inspiring writers for decades to come.  He is a named character in Ernest Hemingway’s 1936 short story The Snows of Kilimanjaro.