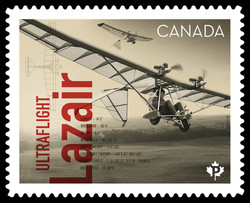 The Ultraflight Lazair – better known as the Lazair – was a family of twin-engine high-wing ultralight monoplanes designed by Dale Kramer of Port Colborne, Ontario. Kramer completed his Lazair prototype in late 1978 and revealed it at the 1979 Sun ’n Fun fly-in and expo, where it won the award for best home-built ultralight. With its true aircraft configuration and 11-metre, glider-like wingspan, the Lazair combined a light, efficient chainsaw motor with modern aircraft materials. Although production ended in 1985, today there are still more Lazairs registered in Canada than any other basic ultralight, and it is considered one of the best light aircraft ever made.

In its early years, the Lazair won top honours in every air show it was entered. In 1982, Kramer flew in exhibition flights at the Paris Air Show. The same year, the Fédération Aéronautique Internationale awarded a Diplôme d’honneur to Kramer’s company, Ultraflight Incorporated, for its contributions to the progress of aviation. In 1983, the Canadian Aeronautics and Space Institute presented Kramer with the Roméo Vachon Award for outstanding contribution to the development of aeronautics in Canada. In 1986, he received an Award of Merit from the Ernest C. Manning Awards Foundation for designing, producing and marketing “one of the world’s finest ultra-light aircraft.”