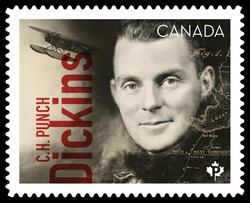 That same year, Dickins made the first reconnaissance flight across the unmapped barren lands of the Northwest Territories in his Fokker Super Universal float plane, covering more than 6,000 kilometres in 37 hours of flying time. For this accomplishment, he received the Trans-Canada Trophy (also known as the McKee Trophy) for outstanding achievement in air operations. During the Second World War, Dickins managed flight training schools as part of the British Commonwealth Air Training Plan, and he headed the Atlantic Ferry Organization, which saw North American-made planes make the dangerous flight overseas to aid the Allies. Dickins held leadership roles at Canadian Pacific Air Lines and at de Havilland Canada, where he influenced the design and launch of the DHC-2 Beaver, often considered the best bush plane ever built. He was the first pilot to log one million miles in flight (1.6 million kilometres).