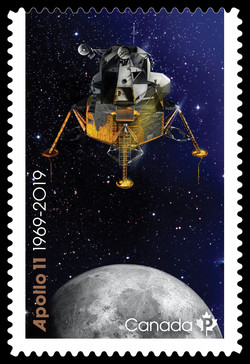 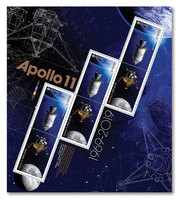 On July 20, 1969, the world held its breath as astronaut Neil Armstrong descended from the lunar module to take “one small step” that signified a giant leap for humankind. The seemingly impossible had been achieved: a human had walked on the moon.

While many people remember what they were doing on that historic day, few realize the critical role Canadian ingenuity, expertise and determination played in this momentous event.

Engineers James Chamberlin (1915-81) and Owen Maynard (1924-2000) – born in Kamloops, British Columbia, and Sarnia, Ontario, respectively – were key players working for NASA in the years leading up to the mission. Chamberlin advised NASA on the type of spacecraft best suited for transporting the Apollo 11 astronauts to the moon and back, assisted in resolving problems with the lunar module, and helped verify the readiness of astronauts’ spacesuits and life-support systems. Maynard created the initial sketches that led to the design of the lunar module, and he ensured that the numerous mission-critical systems of the lunar module and the command and service module interacted properly. Many other Canadian scientists, engineers, computer experts and physicians contributed to the Mercury, Gemini and Apollo programs that paved the way for this remarkable achievement.

Employees at Quebec-based Héroux Machine Parts Ltd (now Héroux-Devtek) manufactured the lunar module’s landing-gear legs – work that involved precision milling within tolerances of thousands of an inch and complicated shapes. The Canadian-made landing gear remains on the moon to this day.

Designed by Matthew Clark of Vancouver’s Subplot Design Inc., these stamps feature realistic illustrations by Mack Sztaba to celebrate the out-of-this-world engineering required to design and build the Apollo 11 modules. “We’re used to seeing the Apollo 11 mission through 50-year-old lenses – grainy photos and blurry images,” explains Clark. “We wanted to show what it would look like if those photos were retaken with the clarity of today’s cameras.”

Sztaba’s primary challenge was achieving total accuracy. “I mostly illustrate in the realms of science fiction and fantasy,” he says. “I’ve never done an illustration that had to be so precise.” The design team was fortunate to have access to experts Randy Attwood and Chris Gainor, who checked every antenna, seam and hatch of the modules for authenticity.

Although countless technological advances have been made since, Apollo 11 still stands out as one of the most awe-inspiring achievements in human history.