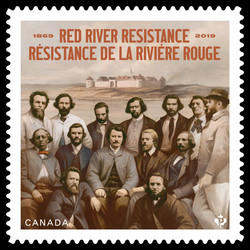 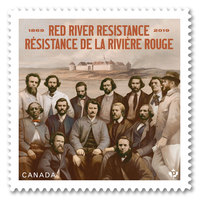 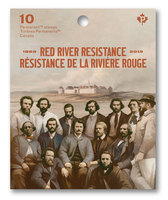 This stamp commemorates the 150th anniversary of the Red River Resistance of 1869 - 70, which asserted Métis rights during the turbulent events leading up to the creation of the province of Manitoba.

In 1869, the Canadian government acquired from the Hudson’s Bay Company a vast tract of western and northern lands, including present-day Manitoba. Fearing the loss of their land and cultural rights, the majority Métis population of the Red River Settlement established a provisional government – under the leadership of Louis Riel – to negotiate with the Canadian government. The result was the Manitoba Act, which brought the first western province into Confederation on July 15, 1870.

Designed at Montréal’s Paprika by Raymond Lanctot, with art direction by Louis Gagnon, and illustrated by Gérard DuBois, this Permanent™ single stamp issue was created in close consultation with the Métis National Council.

“The Métis Nation is one of the founders of Manitoba,” says David Chartrand, President of the Manitoba Métis Federation. “In partnership with Canada Post, we are pleased that we can all commemorate our history.”