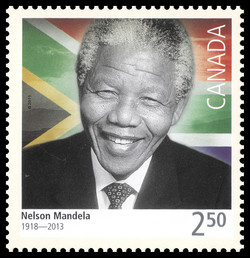 Descendant of tribal royalty, prisoner, president, Nobel laureate – Nelson Mandela was all these, yet he was a dignified and humble man. His struggle against apartheid inspired hope; his victory triggered a global celebration; his death, in 2013, brought millions to tears.

A leader of the African National Congress, Mandela was arrested in 1962, and sentenced to five years in prison for leaving South Africa without a passport and inciting workers to strike. He was serving this sentence when he was brought to trial in 1963 for sabotage, then convicted June 12, 1964. Mandela would be imprisoned for more than 27 years.

Released in 1990, Nelson Mandela became the first president of South Africa in 1994 to be elected in a free vote by persons of every race. It was the first election in which he could legally cast a ballot. During his life, he received hundreds of awards, including the Nobel Peace Prize in 1993, numerous honorary degrees and a knighthood. In 1999 – the year he stepped down from the presidency – TIME magazine named him one of the 20th century’s 100 most influential people. Mandela was also the first living person bestowed with honorary Canadian citizenship.

Our stamp was designed with a photograph by Yousuf Karsh, taken on Mandela’s first visit to Canada in 1990. As the story goes, the future president had just arrived at the Château Laurier in Ottawa, exhausted from a long flight. Sensing the need for some levity, Karsh, who was known for his wit, told him that he had recently photographed Pope John Paul II, and had casually asked him how many people worked at the Vatican. “About half of them,” replied the pontiff. Mandela broke into the warm laugh captured by Karsh.

Canada Post is grateful to the Nelson Mandela Foundation for its cooperation and assistance in the creation of this stamp issue.