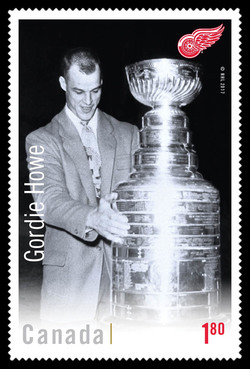 Gordie Howe played more than 30 seasons of professional hockey, including 26 in the NHL with the Detroit Red Wings and Hartford Whalers. In 1,767 regular-season NHL games, he scored 801 goals, 1,049 assists and 1,850 points. At the time of his retirement, Howe was the NHL’s all-time leader in games played, goals, assists and points. He won four Stanley Cup Championships, the Art Ross Trophy six times, the Hart Trophy six times, the Lester Patrick Trophy for his contribution to hockey in the United States and was the inaugural recipient of the NHL Lifetime Achievement Award in 2008. He was inducted into the Hockey Hall of Fame in 1972. The Detroit Red Wings retired his No. 9 in 1972.