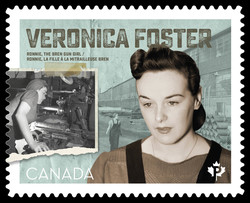 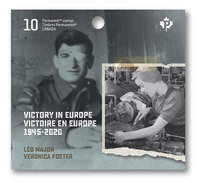 By the height of the war, nearly one million Canadian women were working in manufacturing plants, filling gaps in the workforce left by men serving overseas. In 1941, Veronica Foster, who made Bren light machine guns at John Inglis Co. Limited in Toronto, was selected by the Canadian government for a public relations campaign to encourage women’s participation in the nation’s war industries. “Ronnie the Bren Gun Girl” – believed by some to have inspired the fictional American icon “Rosie the Riveter” – motivated women across Canada to roll up their sleeves and get to work for the war effort.

On May 8, 2020, we mark the 75th anniversary of the end of the Second World War in Europe – a milestone known as Victory in Europe Day. More than one million brave Canadians who served in the conflict helped make the victory possible – as did everyone on the home front whose efforts kept the economy going and provided food, munitions and other critical supplies to the armed forces. To mark this significant anniversary, Canada Post issued a pair of stamps. They tell the stories of two Canadians who exemplified the courage, determination and sacrifice that helped secure the victory in Europe.