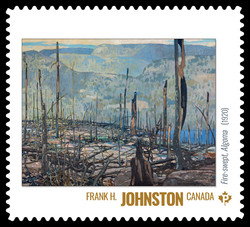 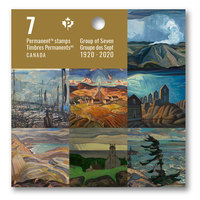 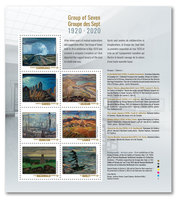 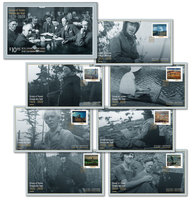 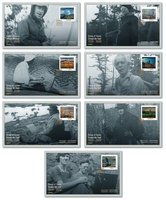 In May 1920, Canadian artists Franklin Carmichael, Lawren S. Harris, A.Y. Jackson, Frank H. Johnston, Arthur Lismer, J.E.H. MacDonald and F.H. Varley held their first exhibition as the Group of Seven at the Art Gallery of Toronto (now the Art Gallery of Ontario). Inspired by Tom Thomson, who had drowned in a boating accident three years before, the Group’s raw and visionary depictions of the Canadian landscape changed the world’s view of Canada and influenced generations of artists to follow. According to Charles C. Hill, former curator of Canadian art at the National Gallery of Canada, the seven artists – most of whom had worked together at a commercial art studio in Toronto – shared the belief that the Canadian landscape was distinctive, and its interpretation required “a new visual language of bold colour, brushwork and form.”

More than 2,000 people visited the three-week exhibition, which received positive reviews, including one by Canadian Courier writer Augustus Bridle, who praised the “work of men who act on the belief that Canada has a colour scheme and subject interest entirely her own.” The National Gallery bought three of the five paintings sold at the show and provided additional support through organized tours and, later, inclusion in its reproduction program.

Never before featured on Canadian stamps, the paintings in this set represent outstanding examples of the work of each original member and were selected by the Canadian Stamp Advisory Committee from a shortlist of suggestions by experts Charles C. Hill and Ian Thom, senior curator at the Vancouver Art Gallery. Galleries from across Canada contributed content to the issue, and the McMichael Canadian Art Collection Archives provided images of the artists and photographs of the 1920 exhibition for the seven-piece set of Official First Day Covers. The famous photograph of the Group of Seven at Toronto’s Arts & Letters Club – which appeared on the 1995 issue celebrating the Group’s 75th anniversary – graces the set’s OFDC folder cover.