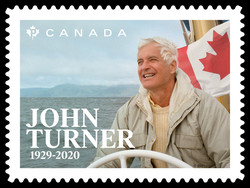 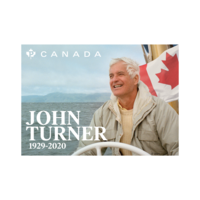 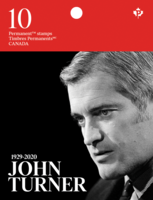 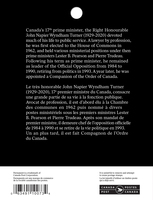 Remembered by mourners at his state funeral for his integrity, humility and grace, the Right Honourable John Napier Wyndham Turner (1929-2020) – Canada’s 17th prime minister – dedicated much of his life to public service.

First elected to the House of Commons in 1962, Turner spent nearly a decade as a cabinet minister under prime ministers Lester B. Pearson and Pierre Trudeau before taking the helm as prime minister in 1984. After the Liberals were defeated in the next election, he stayed on as leader of the Official Opposition for six years.

A corporate lawyer by trade, Turner advanced major justice reforms during his time as a politician and fought tirelessly for the environment. The stamp image, chosen by his family, shows another side of the former prime minister, who was an avid outdoorsman: at the literal helm on a sailing trip through Haida Gwaii in 1985.