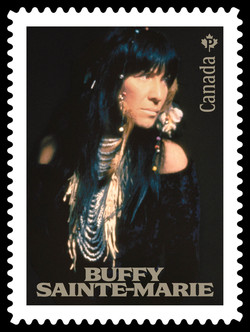 Celebrate one of Canada’s most successful singer-songwriters – Buffy Sainte-Marie – with this booklet of 10 PermanentTM domestic rate stamps. Also an activist, author and educator, Sainte-Marie’s talent, unique artistic vision and extraordinary bravery in the face of adversity have won her a passionate and loyal following across the country and around the world.

The stamp features a photograph of Sainte-Marie by Simon Fowler that appeared on the cover of her single “The Big Ones Get Away”, from her 1992 album Coincidence and Likely Stories. The booklet cover photo shows her playing her Ovation guitar and is courtesy of Ovation Guitars/GEWA Music.

Internationally renowned for her emotionally charged songs, distinctive vibrato vocals and electrifying stage presence, Sainte-Marie is believed to have been born on the Piapot First Nation in Saskatchewan in 1941. Raised in New England by her adoptive parents, she taught herself to play piano and guitar, launching her career as a folk artist at coffee houses and festivals in the early 1960s. Sainte-Marie’s work – from soulful ballads to rousing anthems – is influenced by a range of musical genres and has been covered by hundreds of artists – including Elvis Presley and Barbra Streisand.

An outspoken defender of Indigenous rights, she has used her music for social and political commentary. The anti-war anthem “Universal Soldier” remains one of her best-known songs. She is a Companion of the Order of Canada and a recipient of multiple JUNO awards and other awards, including an Academy Award for co-writing the hit “Up Where We Belong” for An Officer and a Gentleman.